The 2022 Michelin Guide Thailand Features A Total Of 361 Dining Establishments, With 6 New One Michelin Star Restaurants

Featured in this fifth local edition are 361 dining establishments – with 6 two MICHELIN Star (all retained their status), 26 one MICHELIN Star, 133 Bib Gourmand, and other 196 selected entries. New additions to the MICHELIN Guide consist of 6 (all located in Bangkok) in the one MICHELIN Star, and 33 in the Bib Gourmand lists, together with another 51 in the Guide’s official selection.

Gwendal Poullennec, International Director of MICHELIN Guides, revealed: “Due to lockdowns and dine-in restrictions during the COVID-19 pandemic in many countries, the restaurant business has been on its all-time lows. Nevertheless, Thailand sees the opening of new restaurants with interesting cuisine types – such as street-food-inspired stalls and authentic Thai food from ancient recipes. Local produce and ingredients have been incorporated in the menu, as diners are increasingly concerned about living healthy lifestyles and food sources. This not only ensures optimum freshness that elevates the cuisine, but also encourages sustainability in the agriculture and restaurant industries that help boost up the local economy.”

“This year’s MICHELIN Guide celebrates Ayutthaya as the latest city introduced into the guide – yet the oldest and with the richest heritage among all. In addition, this former capital city of Thailand boasts historical charm and retains among the greatest history in Thai cuisine. We are thus convinced that our local and international readers will enjoy exploring this extended coverage of Thailand’s culinary scene,” added Mr.Poullennec.Six New Entrants Joining the one MICHELIN Star List, While the two MICHELIN Star Listing Remains the Same
In the 2022 MICHELIN Guide Thailand edition, two MICHELIN Star listing remains the same with 6 entries – namely, Chef’s Table, Le Normandie, Mezzaluna, R-Haan, Sorn, and  Sühring. However, the one MICHELIN Star selection welcomes 6 new entrants, all located in Bangkok, namely: Aksorn, a Thai restaurant offering flavorsome dishes inspired by chef’s collected Thai cookbooks from the 1940s to the 1970s, with highlights including the coconut cupcakes with salted pork, and the fermented bean curd relish with minced pork and prawns;
Côte by Mauro Colagreco, a French contemporary restaurant with contemporary Riviera-inspired cuisine that serves lunch set menus, à la carte dishes, plus a special nine-course “Carte Blanche” dinner – an Omakase experience where every course is a surprise;

Another 51 Eateries Included for the First Time in This Year’s MICHELIN Guide Selection
Apart from dining establishments awarded with the MICHELIN Star, the Bib Gourmand, and the MICHELIN Green Star; the official selection of the 2022 MICHELIN Guide Thailand edition also recognizes an additional 196 eateries that provide good meals, capably prepared with fresh ingredients and good cooking. Out of this number, 91 are located in Bangkok & Surrounding Provinces, 16 in Ayutthaya, 37 in Chiang Mai, and 52 in Phuket & Phang-Nga.

It is notable that 51 are first-time entrants (15 in Bangkok, 16 in Ayutthaya, 5 in Chiang Mai, and 15 in Phuket & Phang-Nga). Among them are Baan Suriyasai [Bangkok], a restaurant offering time-tested dishes drawn from royal recipes and bygone family favourites – including the savory 5-spice stew with boiled eggs; and the stir-fried crispy pork belly, fish flakes, and dried shrimp with seasoned paste; Phak Wan Noodles [Ayutthaya], the first and only restaurant in Ayutthaya where every dish is cooked using local greens called “Pak Wan” (Melientha), providing unique and pleasantly different flavors and aromas; Yangzi Jiang [Chiang Mai], a Chinese restaurant in a contemporary Lanna house, offering fresh, clean, and expertly cooked food – including the signature steamed scallop dumplings with black truffles; Juumpo [Phang-Nga], a restaurant offering many unique local “Baba” (Chinese-Thai) recipes – such as the Baba-style coconut milk soup with shrimps and Thai herbs, the chilli dip with shrimp, and the fried fish with sweet and sour sauce.

PRU Retains Its MICHELIN Green Star: The One and Only in Thailand
For the second year in a row, PRU – the one MICHELIN Star restaurant in Phuket – retains the MICHELIN Green Star for its sustainable gastronomy practices. As part of the restaurant’s initiatives, ‘Pru Jampa’ – PRU’s own farm that supplies vegetables, herbs and flowers – is where PRU puts the idea of permaculture into practice, while pursuing sustainability and supporting artisan producers. With seasonal, 100% locally sourced ingredients that determine its menu cycles, the restaurant offers a dining experience that combines culinary excellence with outstanding eco-friendly commitment, and stands as a source of inspiration both for foodies and the restaurant industry as a whole.

MICHELIN Guide Thailand 2022 Young Chef Award:
Ms. Garima Arora from Gaa
An Indian native, Garima was born on 9 November 1986 and is the first Indian woman to win one MICHELIN Star in November 2018. Her cuisine is focused on applying traditional Indian cooking techniques onto locally sourced ingredients.  An alumnus of Le Cordon Bleu school in France, Chef Garima has worked alongside many world-renowned chefs, such as Gordon Ramsay, René Redzepi, and Gaggan Anand.

MICHELIN Guide Thailand 2022 Service Award:
Mr. Thibaud Charlemarty from Côte by Mauro Colagreco
According to the MICHELIN Guide inspector, the whole service team under the direction of Mr. Charlemarty is professional and very well-trained. All service sequences were perfectly executed without any flaws. Staff are very approachable and polite. Information of each dish, including inspirations and cooking method, were clearly explained. All elements (excellent food, service, and atmosphere) encourage another visit.

The complete selection of The MICHELIN Guide Bangkok, Phra Nakhon Si Ayutthaya, Chiang Mai, Phuket & Phang-Nga 2022 is now available in the bilingual digital edition (Thai and English) on the website https://guide.michelin.com/th/en; while the print version is scheduled for sale at leading bookstores for 650 Baht from 1 February 2022 onwards.Key Figures of the 2022 Selection at a Glance: 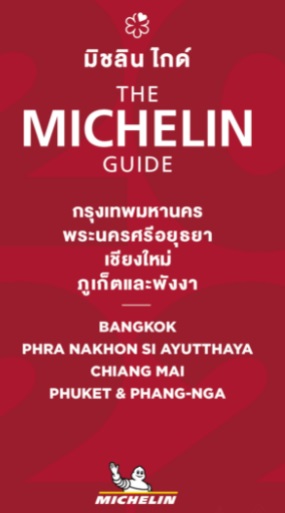 The 10 Recommend 5-star hotels in Krabi, Thailand of Thursday 20 January 2022

The 10 Recommend 4-star hotels in Phuket, Thailand of Thursday 20 January 2022