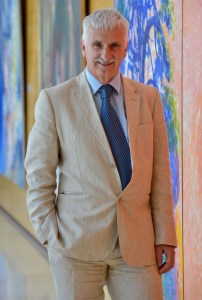 “It is an immense honour to join the list of health laureates of the Prince Mahidol Award,” said Dr Pécoul. “This award also holds a special significance for me because I began my career in Thailand, where I was working in refugee camps 35 years ago. It was there that I saw first-hand the medical neglect that eventually led me and many partners to create DNDi.”

Dr. Bernard Pécoul has led DNDi since its formation in 2003. When the medical humanitarian organization Médecins Sans Frontières (MSF) won the Nobel Peace Prize in 1999, it dedicated a portion of its prize award to exploring an innovative, alternative, not-for-profit model for developing drugs for hundreds of millions of neglected patients worldwide. DNDi was born. Its founding partners included MSF, the World Health Organization (WHO), and a group of five international public health institutions – the Malaysian Ministry of Health among them.

“The Prince Mahidol Award is a well-deserved recognition of Dr Pécoul’s unwavering commitment to treating all people’s health as a matter of priority, no matter whether they are rich or poor,” said Tan Sri Dr Noor Hisham Abdullah, Malaysian Director General of Health and DNDi Board Member. “An excellent example of that commitment bearing fruit is our close collaboration in Malaysia, where DNDi and the Ministry of Health are making tremendous progress expanding access to affordable treatment for people living with hepatitis C.”

Under Dr. Pécoul’s leadership, DNDi has delivered eight new treatments for leishmaniasis, sleeping sickness, and Chagas disease – some of the world’s most neglected diseases – as well as malaria and for children living with HIV. Working in partnership with hundreds of public and private actors around the world, the organization has developed a robust portfolio of projects spanning drug discovery, clinical research, and treatment access for these diseases, as well as for river blindness, mycetoma, and hepatitis C. Together with WHO, DNDi also launched the Global Antibiotic Research and Development Partnership (GARDP) in 2016, now and independent not-for-profit organization developing new treatments to fight drug-resistant infections that pose the greatest threat to health.

Dr. Pécoul has devoted much of his career to advocating for access to medicines and creating an alternative R&D model driven exclusively by patients’ medical needs, not profits. He started his career in 1983 as a doctor with MSF, carrying out field missions in Africa, Latin America, and Asia. In 1988, he co-founded Epicentre, an MSF-affiliated NGO specializing in epidemiology. He became General Director of MSF France in 1991 and then served as Founding Director of the MSF Campaign for Access to Essential Medicines from 1998 to 2003.

“Dr. Pécoul firmly believes that low and middle-income countries can successfully build their own solutions to their own health problems, especially through the power of partnership and collaboration,” said Jean-Michel Piedagnel, Director of DNDi’s South-East Asia Regional Office, based in Malaysia. “This award serves as a recognition of DNDi’s strong footprint in Thailand and South-East Asia and we are certain it will contribute to support our work and strengthen our vital partnerships tackling hepatitis C, antimicrobial resistance, dengue fever, and other major public health challenges facing our region.”

Because of the current pandemic, this year’s laureates will be formally invited to attend the award ceremony in Thailand in 2022. The laureates will be invited soon to deliver online lectures about their achievements.

The Pavilions Hotels & Resorts Invites You To ‘Experience Life’ With Free Rooms!